Can someone review my battery monitoring circuit? I’m building a platform for an ultra low-power wearable. Is the scheme I’ve used with BJTs an appropriate way to measure battery voltage while minimizing parasitic losses?

There are a few ways to do this. One approach is to use P-channel MOSFETs instead of the PNP on your current schematic. Here’s some additional info on this approach. MOSFETs are great because of their low leakage current – and they’re cheap.

The 100k Resistor is used to bias the “OFF” of Q2 on when Q1 switches on under the control of the enable signal.

The two resistors on the bottom right is used as a voltage divider to measure approximately 3.3V. These resistors come in 0402.

From the original circuit that you have, most of the resistors I presumed were for taking into consideration of current leakage, or some sort of precaution. In the diagram that I drew up, the NMOS I chose has a gate-source threshold of 1.2-2V max for it to turn “ON” and from pg 87 of the datasheet for the MCU the Output Low level of I/O pins at VDD=3V is ~0.7V max. So this should work in theory to keep the NMOS “OFF” when it should be. 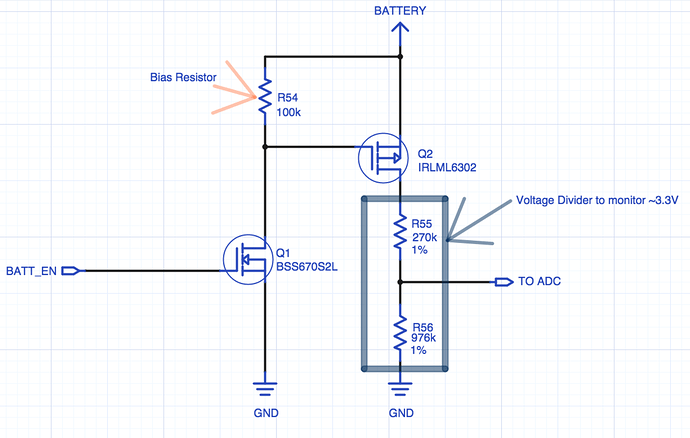 Why not use an Nchannel MOSFET like the 2N7002, to enable a circuit made of a resistive divider and an opamp gain-of-plus-1.00 voltage follower (MCP6031)? That’s 4 components instead of 8, and it eliminates your emitter follower’s temperature sensitivity.

Your circuit concept is good-- only enable the resistor divider to sense the battery voltage when you need to. I just used this approach in a recent design to save power!
I think the bipolar devices aren’t going to help you get an accurate measurement though, the other comments above suggest using MOSFETs and I agree that is a better approach.

The issues I see with the circuit as you’ve got it:
0. It’s not clear what BAT+ is. It would be good to know if you’re trying to sense 3.0-4.2V (Li Poly) or an alkaline cell or lithium primary, or something else.

I would recommend (as the other posters have) using a single MOSFET. You can even use an Nch MOSFET if you chose the right part with low threshold voltages, with the resulting divider being more like 3:1 or 4:1 instead of 2:1. I think the 2N7002 might be ok, but it’s threshold voltage is 2.5V max, so you’d need to make sure the sense node never got above Vcc-2.5 or the MOSFET would start to turn off! Something the AO3414, with 1.8V threshold might be better.

Since you’re turing it on and off, and it’s mostly off, it’s probably better to stick with lower value resistors (10-50k) as opposed to the >250k R’s suggested above – they can increase the noise susceptibility on that node and cause other problems for you.

I would post an image of what I’m talking about but apparently I’m a new user and can’t do such things.
Basically, replace VT2 with AO3414 or equivalent. Directly drive the gate of the MOSFET with your BM_en signal. Add a pulldown (100k or so) to the gate. Add a cap to bat_level. You won’t need R9, R7, R3, or VT1.
[EDIT: the top resistor of the divider needs to be on the high side of the MOSFET!]